"Breaking: Two Explosions in the White House and Barack Obama is injured". This news was published on the Twitter account of the American news agency Associated Press (@AP) in the early afternoon of April 23, 2013. At once, Wall Street went into panic mode.

The recent Boston attack and explosion in Waco had already destabilised the public. This new announced catastrophe immediately caused the Dow Jones index to collapse. Within minutes, it lost 143 points, the equivalent of 136 billion dollars.

But the tweet was a fake - as was the news. The Associated Press account had been hacked by the "Syrian Electronic Army", a group of hackers who had lately intruded into the Twitter accounts of various media. The news was denied by both AP and the White House in the following minutes. The markets recovered.

However, this incident is very significant, for several reasons.

It shows how strongly markets react to instant news, to Twitter in particular, without the least analytical hindsight. In that particular instance, the impact of the fake tweet was amplified by AP's size and influence, since it was expected to provide reliable information. The potential consequences of such situations are disturbing...

Both markets and traders continuously monitor information flows. To do that, they use filtering algorithms based on keywords. This approach raises concerns, because it triggers market fluctuations while relying on information that may not even be real. In plain terms: such analyses lack hindsight.

Following this incident, Twitter's security procedures were again violently criticised. Having previously already suffered a 250-million-password hack, and in view of the huge potential impact of tweeted information, Twitter will need to quickly and thoroughly improve its security procedures. Two-factor authentication is an option, which would prevent any hacker from tampering with an account even if they knew the password. This is a necessity.

In the future, we will certainly see a proliferation of events aimed at manipulating information, whatever it may be. Securing not only sensitive information but also their distribution channels will become one of the new challenges facing both companies and the media. 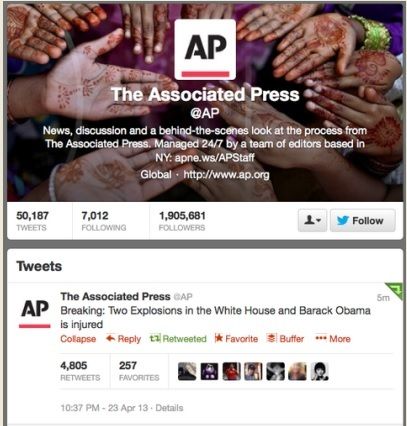